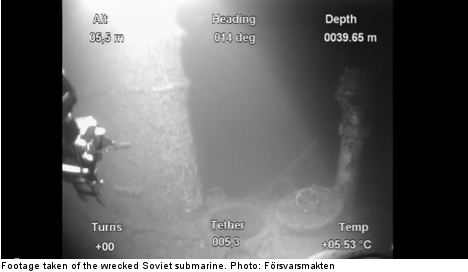 Video clip can be viewed by clicking the picture “or” the source link at the bottom…..

The wreck was discovered earlier this autumn following reports in the Russian media that Swedish civilian divers had found a submarine wreck southeast of Öland, the Swedish Armed Forces (Försvarsmakten) said in a statement.
The wreck was localized by the submarine rescue ship HMS Belos, which also managed to take pictures of the sunken Soviet sub.

According to the Swedish military, the wreck is likely that of S6, a Soviet submarine that went missing in September 1941.
The wreck was found near the Wartburg mine barrier in international waters, but within Sweden’s economic zone.
While it remains unclear exactly what may have caused S6 to go down, an open hatch provides some clues as to what may have happened.
“Boats at the time often sailed on the surface in order to quickly flee and/or to recharge their batteries,” Commander Christian Allerman of the Swedish Navy said in a statement.
The Swedish military theorized that the submarine simply sailed right into the mine barrier and was blown up by a mine.
The wreck consists of two main pieces, with the bow section coming to rest about 20 metres north of the stern section, which was found next to a torpedo-like object.
The images captured by the HMS Belos also show Russian text on the wreck, as well as the Soviet hammer and sickle.