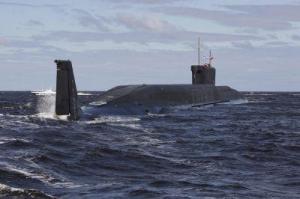 A new Russian nuclear submarine, the Yuri Dolgoruky, drives in the water area of the Sevmash factory in the northern city of Arkhangelsk on July 2, 2009. 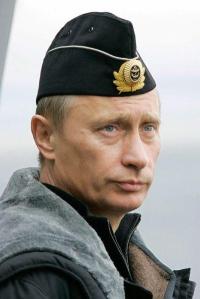 MOSCOW — Russia plans to resume nuclear submarine patrols in the southern seas after a hiatus of more than 20 years following the break-up of the Soviet Union, Itar-Tass news agency reported on Saturday, in another example of efforts to revive Moscow’s military.
The plan to send Borei-class submarines, designed to carry 16 long-range nuclear missiles, to the southern hemisphere follows President Vladimir Putin’s decision in March to deploy a naval unit in the Mediterranean Sea on a permanent basis starting this year.
“The revival of nuclear submarine patrols will allow us to fulfill the tasks of strategic deterrence not only across the North Pole but also the South Pole,” state-run Itar-Tass cited an unnamed official in the military General Staff as saying.
The official said the patrols would be phased in over several years. The Yuri Dolgoruky, the first of eight Borei-class submarines that Russia hopes to launch by 2020, entered service this year.

Putin has stressed the importance of a strong and agile military since returning to the presidency last May. In 13 years in power, he has often cited external threats when talking of the need for a reliable armed forces and Russian political unity.
Fears of a nuclear confrontation between Russia and the United States has eased in recent years, and the Cold War-era foes signed a landmark treaty in 2010 setting lower limits on the size of their long-range nuclear arsenals.
But the limited numbers of warheads and delivery vehicles such as submarines that they committed to under the New START treaty are still enough to devastate the world. Putin has made clear Russia will continue to upgrade its arsenal.
Russia’s land-launched Intercontinental Ballistic Missiles (ICBMs) would fly over the northern part of the globe, as would those fired from submarines in the northern hemisphere.
Both the Borei-class submarines and the Bulava ballistic missiles they carry were designed in the 1990s, when the science and defense industries were severely underfunded.
Russia sees the Bulava as the backbone of its future nuclear deterrence, but the program has been set back by several botched launches over the past few years.