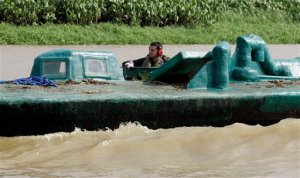 A Navy sailor drives a seized submarine, used by drug-traffickers to smuggle drugs, while displaying it to the media in Atrato River, coast of Turbo, Colombia

On January 8th the Colombian Navy captured its first drug smuggling submersible vessel of the year. This one was 18 meters (56 feet) long and capable of carrying over four tons of cocaine. It had been abandoned at sea and was towed back by a Colombian Navy ship to try and find out what happened. Last year the Colombians captured eight of these. Naval forces from the United States and other nations along the Pacific coast and the Caribbean caught even more. But the detection system, run mainly by the United States, locates a lot more of these cocaine subs than there are warships available to run them all down.

For two decades the United States has used a special interagency (Departments of Homeland Security, Justice, State, and Defense) and international (over a dozen nations participate) intelligence sharing/analysis operation (Joint Interagency Task Force-South) to track drug smuggling from South America. For the last decade the task force has become quite expert at tracking the submarines and submersibles built in South America for smuggling cocaine to North America and, recently, all the way to Europe. Some of these long range subs are apparently going all the way from Ecuador to the United States, bypassing the Mexican cartels (who have been fighting each other, in a big way, for the last five years).

A makeshift submarine is lifted out of the water at Bahía Malaga on the Pacific coast,

Particularly worrisome are the larger boats headed for Europe. Little is known about these, expect that they exist. These subs would be more at risk of being lost because of accident or bad weather than being spotted. European navies (especially Portugal and Spain) and coast guards have been alerted and are looking.

Despite losing over a hundred of these vessels to the U.S. and South American naval forces (and dozens more to accidents and bad weather) the drug gangs have apparently concluded that the subs are the cheapest and most reliable way to ship the drugs. It’s currently estimated that over 80 percent of the cocaine smuggled into the United States leaves South America via these submarines or semi-submersible boats.

Most of these craft are still “semi-submersible” type vessels. These are 10-20 meter (31-62 foot) fiberglass boats, powered by a diesel engine, with a very low freeboard and a small “conning tower” providing the crew (of 4-5), and engine, with fresh air and permitting the crew to navigate. A boat of this type was, since they first appeared in the early 1990s, thought to be the only practical kind of submarine for drug smuggling. But in the last decade the drug gangs have developed real submarines, capable of carrying 5-10 tons of cocaine that cost a lot more and don’t require a highly trained crew. These subs borrow a lot of technology and ideas from the growing number of recreational submarines being built.

The Colombian security forces and other Latin American navies have been responsible for most of these vessel captures. Usually these boats are sunk by their crews when spotted but the few that were captured intact revealed features like an extensive collection of communications gear, indicating an effort to avoid capture by monitoring many police and military frequencies. The Colombians have captured several of these vessels before they could be launched. In the last few years the Colombians have been collecting a lot of information on those who actually build these subs for the drug gangs and FARC (leftist rebels that provide security and often transportation for moving cocaine). That includes finding out where the construction takes place.

Colombian police have arrested dozens of members of gangs that specialized in building submarines and semisubmersible boats. As police suspected, some of those arrested were retired or on active duty with the Colombian Navy (which operates two 1970s era German built Type 209 submarines). These arrests were part of an intense effort to find the people responsible for building subs for cocaine gangs. Find the builders and you stop the building efforts. In this case it has only delayed some construction and made it more expensive to build these boats.

Ecuadoran police found the first real diesel-electric cocaine carrying submarine three years ago. It was nearly completed and ready to go into a nearby river, near the Colombian border, and move out into the Pacific Ocean. The 23.5 meter (73 foot) long, three meter (nine feet) in diameter boat was capable of submerging. The locally built boat had a periscope, conning tower, and was air conditioned. It had commercial fish sonar mounted up front so that it could navigate safely while underwater. There was a toilet on board but no galley (kitchen) or bunks. Submarine experts believed that a five man crew could work shifts to take care of navigation and steering the boat. The boat could submerge to about 16 meters (50 feet). At that depth the batteries and oxygen on board allowed the sub to travel up 38 kilometers in one hour, or at a speed of 9 kilometers an hour for 5-6 hours. This would be sufficient to escape any coastal patrol boats that spotted the sub while it moved along on the surface (its normal travel mode). The boat could also submerge to avoid very bad weather. The sub carried sufficient diesel fuel to make a trip from Ecuador to Mexico. There was a cargo space that could hold up to seven tons of cocaine.

The sub was captured where it was being assembled and a nearby camp for the builders appeared to house about fifty people. A lot of evidence was collected, and apparently the U.S. DEA (Drug Enforcement Agency) used that to develop clues about who was involved. It was the DEA that put together the pieces that led to identifying key people.

The Ecuadoran boat was the first such sub to be completed but not the first to be attempted. Back in the 1990s Russian naval architects and engineers were discovered among those designing and building a similar, but larger, boat. However, that effort did not last, as the Russian designs were too complex and expensive. It was found easier to build semi-submersible craft. But more and more of these new type subs are being found.

The Colombian navy said Tuesday it has found an unmanned semi-submersible submarine used for drug trafficking adrift in the Pacific Ocean.

The submarine was found by a navy patrol 60 nautical miles from the mouth of the Naya river, which enters the Pacific from Colombia’s South coast, without crew or drugs.

Authorities have theorized that had events gone to plan, drug traffickers would have rendezvoused with the submarine, loaded a drugs shipment, and dropped off a crew to pilot the transporter to Central America.

The submarine “could reach the Mexican coast without refueling, and has a fuel capacity of around eight days,” according to Navy Commander Carlos Delgado.

Delgado said the submarine 18 meters long and 3 meters wide, is equipped with two diesel engines and has the capacity to carry three to four people and up to five tons of illicit substances.

It is the first semi-submersible submarine to be seized by authorities in 2013, following the eight that were confiscated in 2012.